Zombies are the rage now, and have been for a while. Who hasn’t seen a bumper sticker around town that says something to the effect of “Zombie Apocalypse Response Team?” And who hasn’t heard of AMC’s The Walking Dead? It seems some are really into this end-times, Walking Dead, zombie apocalypse theme. 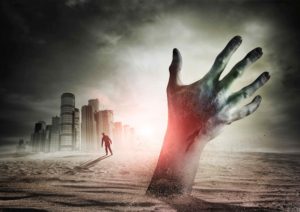 But what would happen if an unbelievable, apocalyptic natural disaster struck? I mean the type of event that would render electrical and telecommunications useless, banking/ATM impossible, and take transportation back to the stone age? One thing you should keep in mind in such a situation:

Make good friends with a veterinarian.

A friend and veterinary colleague in Pennsylvania attended a One Health continuing education meeting a couple years ago to which MDs, DDSs and DVM/VMDs were invited. In the session entitled “Disaster and Apocalypse Preparedness,” the county director of public health informed the attendants that in such a situation, veterinarians should expect to be called upon to perform surgical and treatment procedures on humans. Dentists, similarly, might be called upon to provide basic anesthesia. To hear my friend describe the lecture, “It would be cats and dogs living together and we would need to suck it up and get used to it.” Whoever had the skills to do what was needed was going to have to do it.

The director was asked if a veterinarian who would, for example, reduce a fracture and splint a leg be liable in the event of a poor outcome and the human patient ended up with a limp. The director responded, “Only if society returned to a functional state with a working court system. You should be so lucky.”

And here is where it gets interesting for veterinarians and your relationship with them. The director was asked if it wouldn’t make more sense to have the veterinarians working on setting up herd health programs for the remaining livestock for the purpose of having a sustainable food supply while the physicians treated the humans as needed. His answer: “Well sure, if possible. But if the only MD around is, say, a psychiatrist or an interventional radiologist, it’s unlikely they’d be as good at managing basic human traumas as your average GP veterinarian.”

So there you go. Take it from a director of public health in a major metropolitan area of Pennsylvania… you’d do very well to have a good veterinarian handy in the event of apocalyptical societal collapse.

This concludes what will most likely be the only reference to zombies on the Cuyahoga Falls Veterinary Clinic’s blog and website.

Urinary Obstruction in a Male Cat