In our constant effort to provide the best services and procedures as well as the latest, most cutting-edge technology for our patients’ needs, we are now offering the Tibial Tuberosity Advancement procedure for dogs and cats who injure the cranial cruciate ligament of the knee.

Wow, those were some medical-sounding terms! What is the cranial cruciate ligament? And what is a Tibial Tuberosity Advancement?

Let’s start with the basics. (And don’t be intimidated by the drawing below.) Dogs’ and cats’ knees are called stifles, the shin bone is the tibia, and the thigh bone is the femur.

The cranial cruciate ligament (CrCL) is the most commonly injured ligament in dogs and cats. The CrCL prevents the tibia from sliding forward relative to the femur. When this abnormal motion occurs, it is called a “cranial drawer,” and the bones rub against each other (OUCH!) causing significant damage to the cartilage that covers the bones and the meniscus between the bones. Instability leads to arthritis in and around a joint. When humans tear this ligament, you’ll hear the term “anterior cruciate ligament,” or ACL. (Some athletes with ACL injuries you may have heard of: Peyton Manning, Bode Miller, Jerry Rice, Picabo Street, Tom Brady, Tiger Woods, Saquon Barkley, Baron Davis, Nick Bosa, and Odell Beckham, Jr., to name a few.)

A torn cruciate ligament is a surgical problem, not a medical problem. These dogs and cats require knee surgery to provide stability and healing. There are a couple of surgical procedures that do a good job of addressing the needs of these pets.

1) The Lateral Suture technique involves placing a synthetic suture on the outside of the knee joint (but still beneath the skin!) that mimics the pattern of the torn ligament and prevents the shin bone from sliding forward. This procedure involves a 4 to 6 month recovery period as the patient gets used to the changes from the surgery and as scar tissue forms to help further stabilize the knee. Dogs must have absolutely no unrestrained activity for at least 12 weeks.
Physical therapy is very helpful for these dogs. The total recovery period is about 6 months.

2) A Tibial Plateau Leveling Osteotomy, or TPLO, is a very good procedure for stabilizing the stifle.  The procedure involves creating an osteotomy (fracture) and repositioning the top of the shin bone with the goal of providing a flat surface for the thigh bone to rest. These dogs recover more quickly than the Lateral Suture patients do.  There is still the matter of a healing, weight-bearing fracture. Additionally, there is damage to the joint capsule at the time of surgery that can lead to further formation of arthritis. Most dogs are bearing good weight within a couple of weeks, and exercise restrictions are lifted around 3 months for the TPLO patient. The cost of a TPLO is typically twice that of the Lateral Suture, and can been similar to or about 20% more than that of the TTA. Which leads us to… 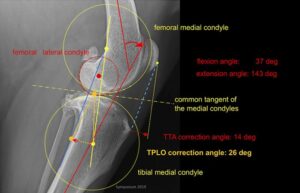 3) The latest development in the world of treating CrCL/ACL injuries is a procedure called the Tibial Tuberosity Advancement (TTA). This procedure changes the physics of the stifle, but doesn’t alter the joint capsule or create a weight-bearing fracture like the TPLO.

TTA patients are walking on the operated leg within days, and the total recovery time for TTAs is typically 8 weeks.

Given that the TTA has benefits over each of the other procedures, the Tibial Tuberosity Advancement is the treatment of choice at the Cuyahoga Falls Veterinary Clinic.  Dr. Gates performed the procedure on each of his own Boxer’s stifles when she tore her CrCLs.  If your dog is limping and you don’t know why, or if you’ve received the diagnosis of a torn cruciate ligament and you’re looking for a second opinion when it comes to treatment options, give us a call at 330-929-3223 to meet with one of our doctors. Your pet will thank you!

(Stifle diagram used with permission from KYON Pharma, developers of the TTA.)